Available on prescription from 1 December 2021 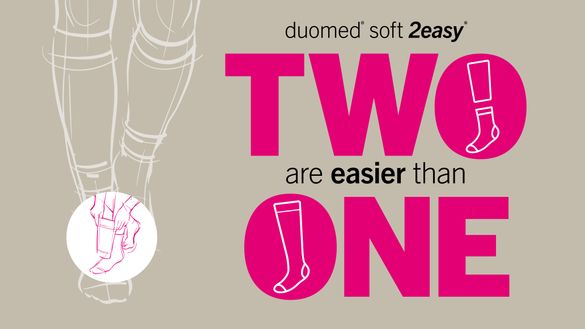 duomed® soft 2easy® - compression innovation from a UK based Dermatologist

duomed® soft 2easy® was the brainchild of Dr Rob Lister who, after many years in the clinical field, recognised a worrying trend amongst patients failing to wear the compression devices needed to manage vascular conditions and chronic oedema.

Talking to patients, he found that a big issue was that the compressive nature of the standard one-piece garments made them difficult to put on or take off, especially for those who struggled to bend down or had dexterity issues.

The fact that duomed® soft 2easy® is a two-piece rather than a singular garment makes it much easier to get over the foot and past the ankle. The easy donning and doffing of duomed soft® 2easy® compression will drastically improve the quality of life for thousands of people living with vascular and chronic oedema.

duomed® soft 2easy® is so easy to apply:

Supports motivation and engagement so patients commit to compression therapy

How to apply duomed® soft 2easy®

Do you need support?

You are very welcome to contact the medi Clinical Team for advice on products, best practices or questions.